Oscar Hunt has a look at some of Australia's best dressed businessmen and nominated our top 5 contenders. over the past 2 weeks and we can now reveal that the '2019 Oscar Hunt Australia's Best Dressed Businessman' is...

With almost 50% of the votes, Mark Bouris was a clear favorite in this year's competition. Bouris was born in the Western suburbs of Sydney to a Greek father, and an Irish mother. He studied at the University of New South Wales before founding Wizard Home Loans in 1996. He then sold Wizard to GE Money in 2004 for $500m and in 2007 he founded and is currently chairman of Yellow Brick Road which deals in financial planning and wealth management. In 2015, he was appointed a member of the Order of Australia for services to the finance industry and charitable organisations. His trademark look complements his dark olive skin and wavy silver hair with a solid white slim-fitting shirt and a single-breasted, charcoal grey suit. Though he has an athletic build, his suits aren’t overly tight and complement his physique nicely. He almost always wears an open collar shirt but on occasion may be seen wearing a grey or charcoal tie. Subtle patterning complement and give texture to his clean tonal look. His collars are always semi-spread and he ties using a Windsor knot. To complement his strong presence, he wears peak lapels, double cuff shirts and silver cufflinks, finishing this all off with his favorite watch - an IWC Big Pilot. His refined and consistent dress commands attention and reflects his influential position within the commercial world. Just behind Bouris was former PM Malcolm Turnbull with almost 25% of the votes. Turnbull grew up with an education at Sydney's most prestigious boarding school, Sydney Grammar. He completed a Bachelor of Arts & Law at The University of Sydney and spent his early career as a barrister. He then established an investment banking firm in 1987, Whitlam Turnbull & Co, before leaving ten years later to become managing director of Goldman Sachs. Business decisions, including the investment of $500,000 into OzEmail and the subsequent $57m return established him as a successful businessman before he entered into politics. Malcolm Turnbull can often be seen wearing tastefully bright patterned ties. Complementing his ties, he often wears a well fitted white shirt paired with a navy or blue sharkskin suit, of which he always opts for a moderately sized notch lapel. His ties are always tied using the Windsor knot, and collars are always semi-spread. Although he mostly wears solid coloured suits, on the rare occasion he may be seen in a subtle check or even a pinstripe. Just months before becoming Prime Minister, Turnbull featured on the cover of GQ Magazine. He wore a white collared, blue banker shirt with a red and white striped knitted tie - a fashionable statement for a seemingly conservative politician. He maintains consistency by utilising dark suits and white shirts, yet characterises his look with bright and colourful ties, much like many other politicians. Although the votes don't reflect it, George Miller is a favourite amongst the Oscar Hunt team. He often goes against the status quo in the way that he dresses and has a clearly defined look which he isn't afraid to own (which we love). Born in Brisbane to Greek immigrant parents, Miller received his secondary education at Sydney Boys High before studying medicine at the University of New South Wales. During his free time whilst on placement at St. Vincent's Hospital, he would crew on experimental films. Ambitiously, Miller established a film production company in 1972 becoming further involved in the film world. He wrote Mad Max during his years as a Doctor in the emergency department, seeing the horrors of road accidents. A cinematic success, and Miller's directorial debut, Mad Max went on to become a film franchise, with three successful sequels, and two more to come. Although he is not necessarily a businessman, George Miller is one of Australia's most successful film directors, producers and screenwriters. His fashion certainly has an individual and quirky sense to it. Circle horn-framed glasses are his signature. Held fast by an eyewear strap, they reflect a studious and academic look. Miller often attends award ceremonies, dressing appropriately in a double-breasted black tuxedo with peak lapels. He pairs this with a white bow tie and white silk scarf and often shows a generous amount of cuff for a more distinct look. Miller meets the requirements of the black tie dress code while reflecting a sense of his unique character. Outside award ceremonies, he often wears a white shirt with the top button done up, and his trademark brown leather jacket, reminiscent of the dystopian colour palette of his Mad Max films. He will also often wear a scarf, which further embellishes his artist’s persona. Through consistency; his glasses, leather jacket, crisp white shirts, scarves and bow ties create a recognisable look. Born and raised in Lima, Peru, Alejandro Saravia moved to Sydney in 2006 to pursue a career as a chef. In 2007 Saravia founded A Taste of Peru, educating foodies in the ingredients, flavours and cooking methods of Peru and Latin America through degustations, cooking classes and gourmet tours to his home country. In 2011 he opened his first restaurant, Morena, in Surry Hills. It paved the way for South American food in Australia and became the first Peruvian restaurant to be featured in The Sydney Morning Herald. Following on from the success of Morena, Alejandro moved to Melbourne where he opened his second restaurant, Pastuso, a Peruvian seafood bar and grill nestled in the heart of the Melbourne CBD. When he's not in his chef whites and apron, Alejandro dresses with style. With a well-groomed full beard and combed back hair, he adds a pair of round horn-rimmed glasses, creating a striking and memorable image. Complimenting this distinct look, he opts for a three-piece suit and double cuffs. Peak lapels further define this mans powerful appearance. On occasion, bright and colourful ties are worn to complete the ensemble. Most often, however, Alejandro seems to prefer an open collar. For Alejandro, it's all about finding the right clothing to suit his personality. In this case, a power suit for a passionate and creative man. Joyce grew up in Ireland in a poor neighbourhood with hard-working parents. He completed a Bachelor & Masters of Science in Dublin, before beginning his aeronautical career at Aer Lingus. He climbed the corporate ladder at Aer Lingus, working in several roles before moving to Australia to join Ansett as an executive. After heading up new low-cost airline Jetstar, Joyce became CEO of Qantas in 2008. He grounded the entire Qantas fleet in 2011, a bold move in response to union strikes. In the same year, Alan Joyce was diagnosed with aggressive prostate cancer. Only two days after surgery, he was back to work, running Qantas from his couch. Alan Joyce has a refined, professional look. His bold black-framed glasses and cutaway collars add a quirky touch to an otherwise classic look. He is often seen wearing conservative white or pale blue shirts. He pairs these with dark suits; either navy, charcoal or sometimes black. His ties are thin, which suit his small stature. His tie selection is consistent and complementary to his look, a refined and tonal addition. Subtle patterning or regal stripes provide texture to an otherwise minimal ensemble, perfect for the corporate world and most appropriate for the role of CEO. They are always tied in a full Windsor knot. His suits are well proportioned to his body and provide a subtle representation of his character behind the professionalism. 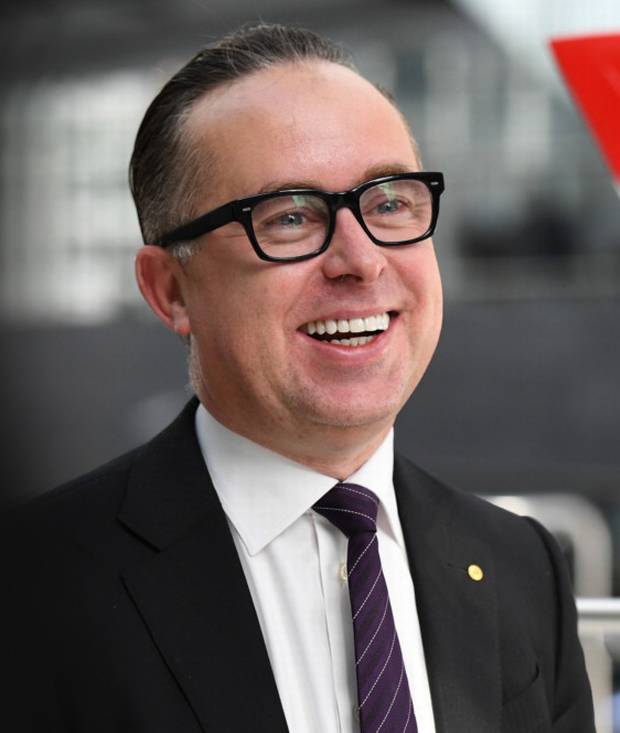